It’s a year of milestones for the Team at i2C. We celebrate 15 big ones in the Biz and one of our brightest stars has clicked over her 10 years with the Melbourne Studio.

Nardia Saunders joined i2C back in 2004 and she is now the 5th Team member to hit the 10 year mark (following on from Brian Jende, Anthony Merlin, Rick Gartner and Anthony Palmas). When Nardia began working she was the only female on the Team which thankfully we have evened up since then.

She has evolved from a raw young Draftsperson, working through the Studio renovation and coping with noise, dust and freezing conditions to become a very accomplished and well respected retail designer who now manages the Melbourne Design Studio.

Our Team is stronger for having Nardia, she has put her finger print on almost every substantial project that has gone through the office over the past 5 years, and plenty of interstate projects.

Nardia has played an integral part in i2C’s success and a major reason why our Studio has an attitude of fun mixed with hard work.

Great work Nardia, looking forward to the next 10 years. 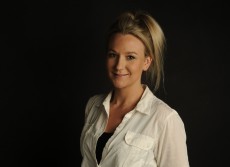