Anthony Bourdain, the renowned American chef and author once wrote about the difficulties in reinvigorating a failed restaurant space. New proprietors may move into the premises with know how and the best of intentions, but somehow the space remains contaminated by the previous failure, and chances of a successful resurrection are slim.

So, is this the same for retail spaces or shopping centres? Can an under performer rise to a new challenge? Here we explore this pattern of refurbishment with the Lidcombe Shopping Centre located to the west of Sydney.

The original monolithic structure was approximately 10-12 years old and 3 storeys high. In a former life it was known as The Lidcombe Power Centre; a bulky goods retail space. Over the past few years i2C has been involved in the transformation and revamp into an active sub-regional shopping centre.

Driving west from Sydney along Parramatta Road, one couldn’t miss this building, yet nothing was inviting a prospective shopper to stop and visit the centre.

A walk around the building uncovered many nasty facts that contributed to this building being unsociable. The relationship of the building to the street frontage was extremely detached with the actual street entry some 3m higher than footpath level. The banks of steps resembled the entrance to a museum or town hall rather than a pedestrian friendly shopping centre. We understand all too well that if you cannot recognize a viable entry, either pedestrian or vehicular, you are behind the 8 ball.

Huge cantilevered canopies flew out in all directions at such a height that they offered no protection to the pedestrians walking below. Vast water features at the top of the stairs would have once fed a waterfall feature falling from the podium level to the street, but this had been turned off long ago. They served no real purpose and were most likely an OH&S issue rather than a planned oasis.

Internally we were faced with vast mall spaces with high concrete ceilings and intermittently working high bay lights. There were some visual connections via open gangways between levels, but these highlighted the fact that the centre was only partially tenanted and that 85% of the 32,000sqm floor area was vacant and dormant. Like gaps in teeth, every few shopfront lighting was turned off leaving a sad reminder of those tenants long gone.

The under croft and basement carparks were empty and lifeless. You could kick a football around for days in there and never hit a car! It was obvious that the centre was dying a slow and painful death. 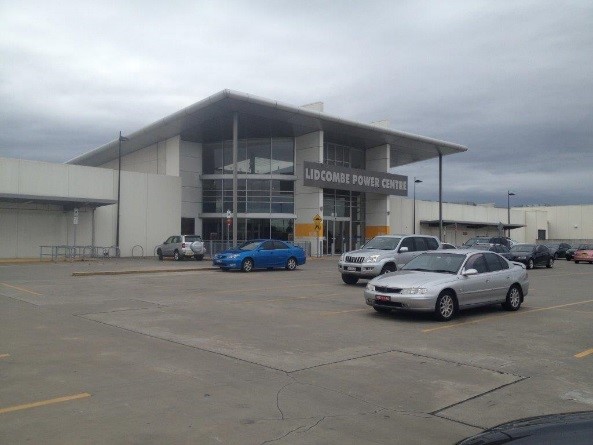 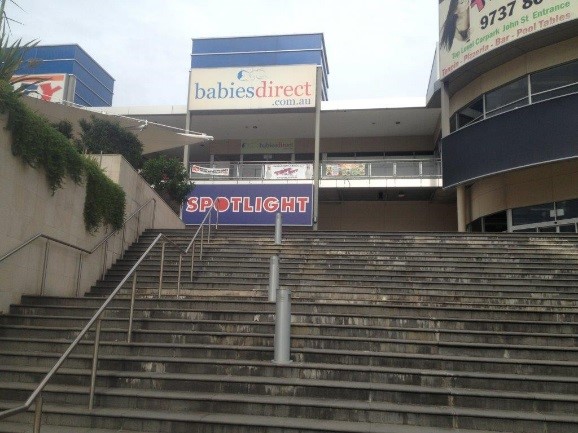 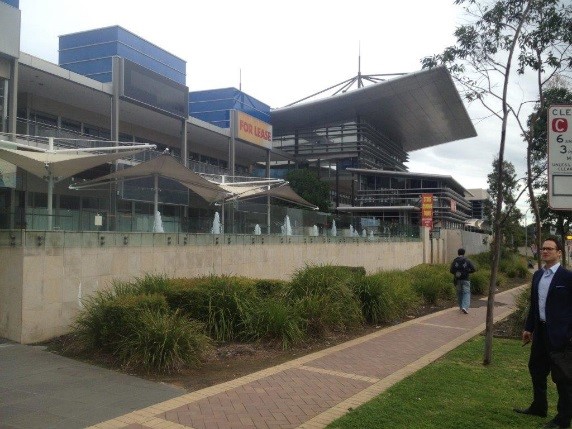 Prior to refurbishment in 2013

It was with this monochrome background that we found ourselves walking through the centre trying to weigh up our challenges as designers and developers.

Although it would be wonderful, it is unfeasible to completely re-vamp a centre of this size both internally and externally.  This is usually done via staging as the centre regenerates and prospers. Therefore prioritizing architectural targets is essential. Where are we going to get the most bang for our buck? We had our work cut out.

But surely all was not lost, let’s spin this. We had a blank canvas from which to work from, even if the cheques funding it weren’t blank.

• We had abundant car parking and available floor area from which to build from. We were in an area known for its markets and ethnic diversity, so that gave us an idea of our target market. A Costco had been recently erected directly across the main road which suggested that research had been carried out and the location had growth potential.

• As designers we needed to create some warmth, community and soul. The old centre was not inviting or embedded in the community; success we see is brought by coffee shops, restaurants, local pop up stalls and rattling tins for nippers or the primary school fete.

• It seemed as if every type of surface and finish had been thrown at this building in the original design. Louvres, glass, precast, metal facades and canopies, stone….you name it, it had it! The aim of a shopping centre is to get the eye trained on the retail and product. The busyness of the architecture was detracting from the task at hand.

• Leasing is a vital and strategic key to success of any centre. A good leasing agent needed to be involved from day 1 and working hand in hand with the architect and development team. It’s not a case of ‘build it and they will come’, the mix and positioning is key and king. Leasing as an afterthought is recipe for disaster. The original centre had no major tenants to encourage confidence in smaller retailers getting on board. It needed to become a destination.

The malls are on two major axis with the central North-South spine accessing the existing 4 levels of car parking. The main East-West axis comprises new majors Woolworths and Kmart anchoring either end on the Ground Floor. A new Aldi supermarket is also located on the Ground Floor.

Through carefully planned leasing and precincting of specialty zones, the smaller specialty shops enjoy activation as the patrons create ant tracks to the larger anchors. With luxe levels increased due to activity both in the mall and shop fronts, the spaces are immediately warmer and inviting. 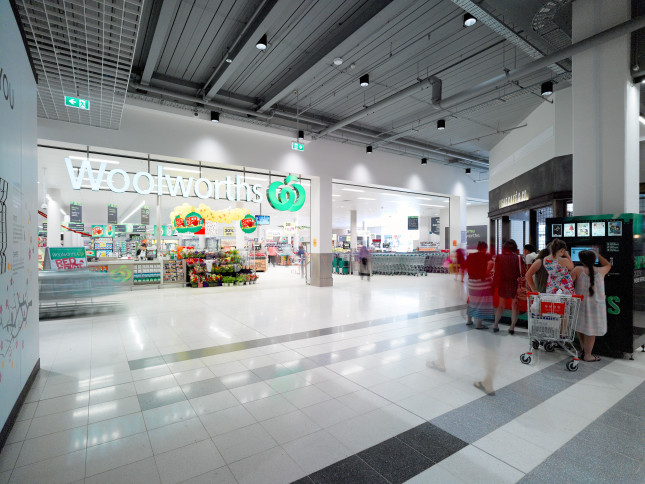 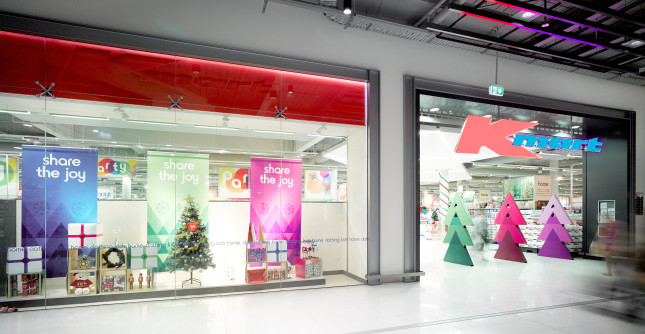 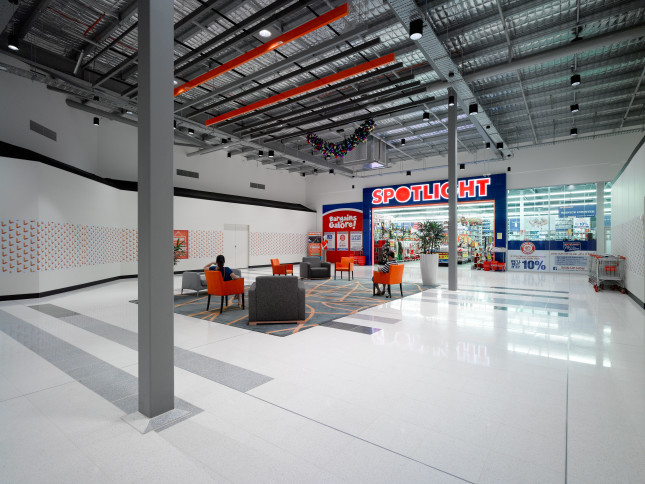 As part of the works, the two original large tenants, Anaconda and Spotlight, were relocated and refurbished, respectively, to act as the major anchors on Level 1. Another existing tenant, Party Warehouse, was relocated to the southwest corner of the development enabling them to continually operate throughout the project.

Approximately 60 specialty tenancies and 11 kiosks are now located on both levels. The introduction of fresh food precincts, food courts and dynamic specialty tenants should dramatically increase the vibrancy of the centre. It should also encourage the further leasing of tenancy space as the centre matures. 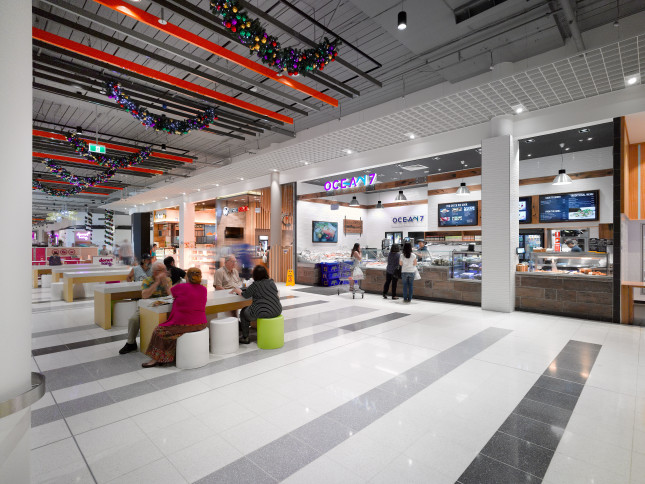 Access and sightlines were important throughout the development and a new set of transitional travelators were installed over 4 levels. The construction of a new Mezzanine bridge and new voids contributed heavily to the new architecture and visual connection.

New glass balustrade has been provided (using existing supports where possible) with the orange vinyl patterning, echoing the imagery that has been used outside.

The laying of new neutral tone terrazzo tile floors to the mall embraces a fresh, light feel to the main thoroughfares. The addition of a darker “warmer” tile to the new food court identifies a distinct zone for this precinct.

Lowering the customer’s sight line from the large volumes within the malls was important. This was achieved with the addition of open frame blade panels / grids suspended throughout the walkways in order to occupy the space by creating a sense of intimacy but not enclose the open feel.

Lowering the light source level was also important to this, providing a ceiling level without have a physical ceiling structure. A balanced scale of the light fittings gives an ambience resembling retail rather than industrial.

Feature pendant lighting and mall seating spaces provide transition points though out the mall and also customer engagement points creating a pedestrian engagement with the space. 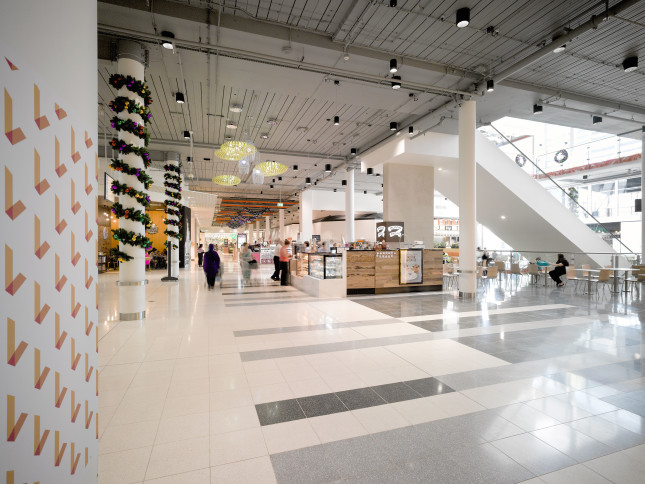 The material palette was selected to provide a neutral yet warm tone with a “POP” of visual colour, the connection of the orange (and yellow) tone from the exterior finishes and the way finding has been embraced with the branding and general feel within the centre.
The new void cut outs and additional vertical transport connection links the retail floors and provides the important visual connection to other retail shops for the customer.

External Branding and upgrading of facades presented a challenge and is a prime example of where the previously mentioned ‘bang for buck’ was discussed at length.

An existing external 2 level verandah taking up prime real estate provided no real benefit to the existing centre. It was enclosed to create internal malls and greater covered pedestrian routes on both the Ground and First floor levels.

Bondor Metecno Panel was chosen as the external building fabric for its thermal and fire retardant properties. As it is lightweight cladding system it was also suitable for use on the existing structure requiring minimal additional support. The modular panel system also allowed long panels to achieve the vertical patterning by using the dark and light grey standards. This was contrasted with special light orange external pre-finished panels and white internal colorbond finishes. A bright orange vinyl band adds to the colour and movement of the external façade designed to capture the attention of vehicles moving along Parramatta Road in both directions.

Branding is now a dominant factor of the development with two new pylons signs installed along Parramatta Road and the Northwest and Northeast corners of the building acting as major focal points, and a bold announcement of new major tenants and new life. 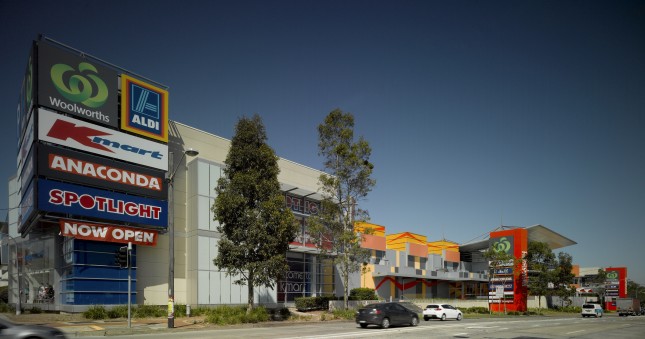 So have we achieved what we set out to do?

In all honesty it’s probably too early to tell, but we believe that the blood is starting to pump again. We understand that the majors are beginning to trade well which is having a knock on effect on smaller players. Reputation is being built as the centre becomes a destination of choice and a welcome resident in the neighbourhood.

At i2C we’ve learned from previous projects that these things sometimes don’t happen overnight. Growth is usually organic and based on the increase in density. This is certainly the case for many Greenfield sites, but rebranding is a different beast.

Like any failed relationship, trust must be re-earned and constantly revisited, and you only get so many chances. Lidcombe will live or die on how it serves the local community and how it reinvents itself to remain relevant heading into the future.

Employment of many locals in major shops must surely have a positive effect on community ownership and be a drawcard for wanting to visit the centre.

We are looking forward to visiting the centre in 12 months and 5 years to see how it’s embedded itself. Lidcombe is off the canvas and having a crack, and will hopefully be a stellar example of how a centre can reinvent itself. 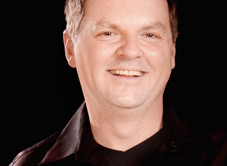