In 2012 ALH Group engaged us to investigate opportunities to build a new Dan Murphy’s on the site known for the Golfview Hotel in Guildford. As the name suggests the existing pub is located adjacent to the Golf Club set within an industrial area facing a busy road and local residents.

Building a new liquor outlet on the existing site would not only create new employment opportunities but provide convenience to the locals and by-passers. The existing Golfview Hotel was built in 1969, the interior spaces were dated, some were vacant and neglected which triggered the need for a refurbishment. The proposed hotel and gaming upgrade works would bring in more locals into the premises.

Taking an existing hotel from the late 60s, heavily rendered paint finish with arches and tiled roofs and trying to marry in with a new, modern branded liquor store needed a design strategy which allowed the amalgamation to work operationally as well as aesthetically. 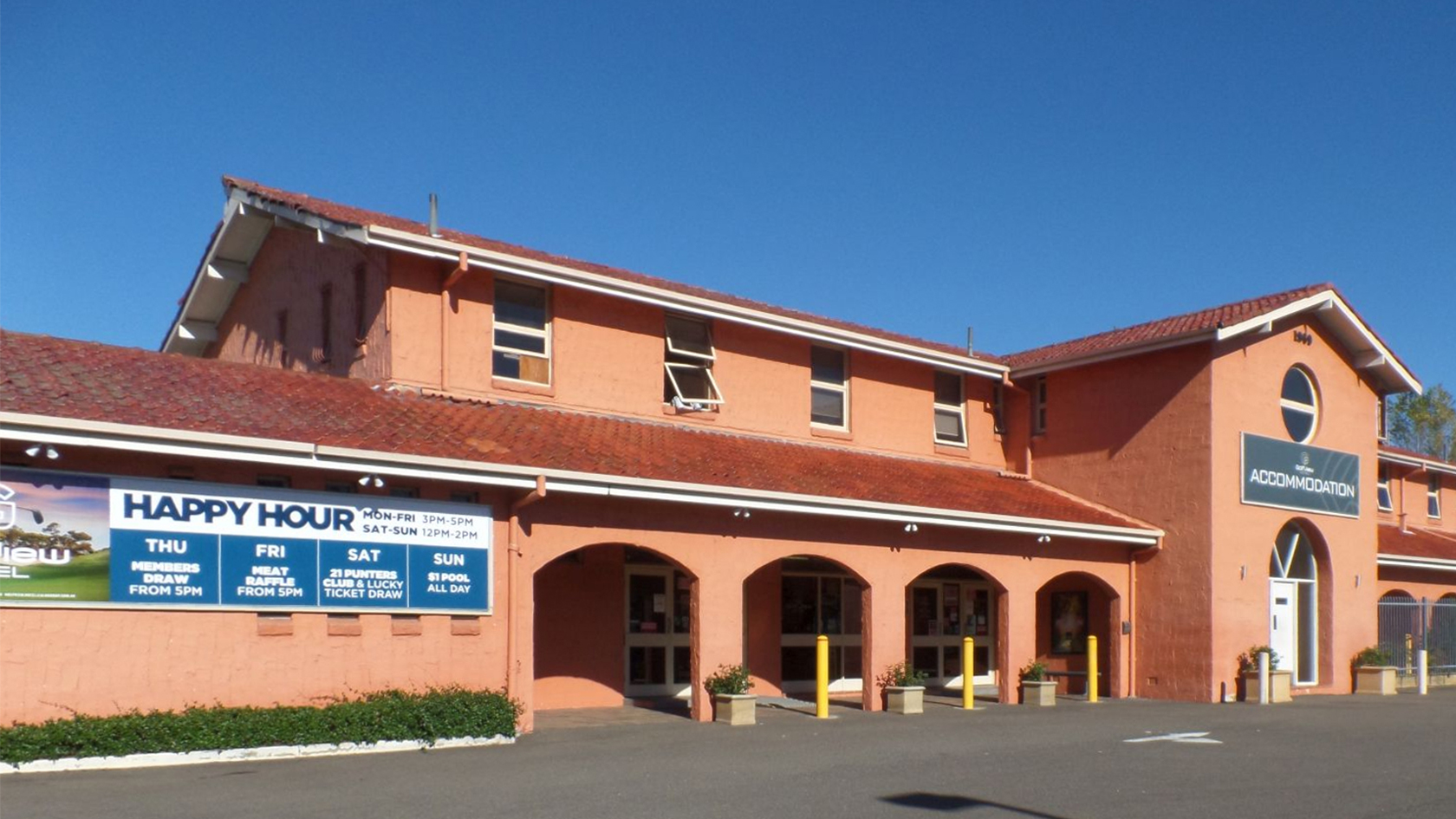 The hotel needed to be reduced in its footprint allowing for a new Dan Murphy’s store. The strategy was to chop the hotel building in half and leave a clear separation between the new built. 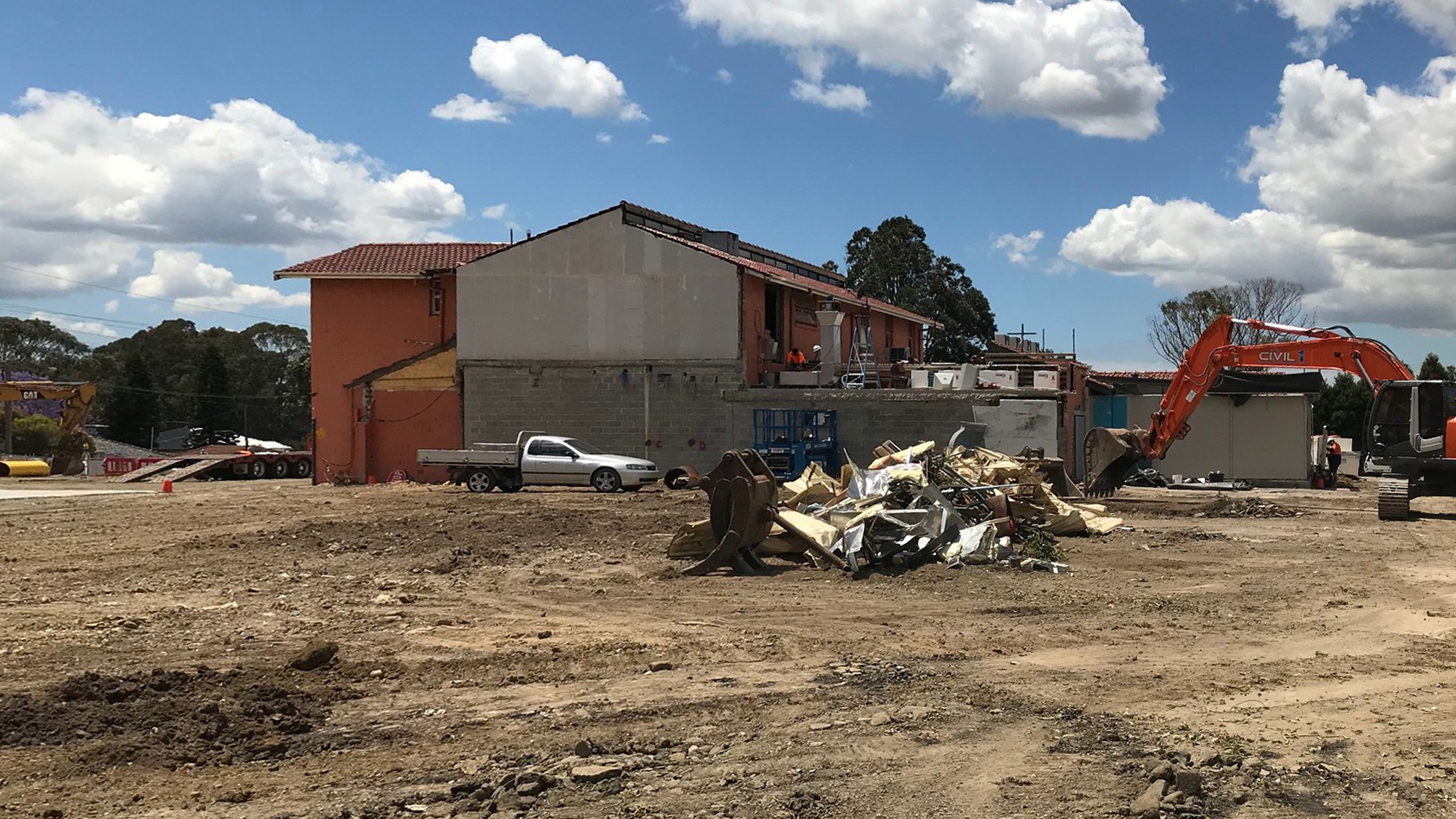 Various massing studies were done to understand the composition of both buildings. The site context drove the design approach of the external façade. By repainting the external façade of the remainder hotel and some maintenance work, the new Dan Murphy’s could be designed to complement and at the same time contrast the hotel taking cues from its industrial surroundings.

Internally the hotel needed to be re-designed to allow for a smaller footprint with new kitchen, refurbished bar and gaming area. Space planning was done in collaboration with expert gaming advice. 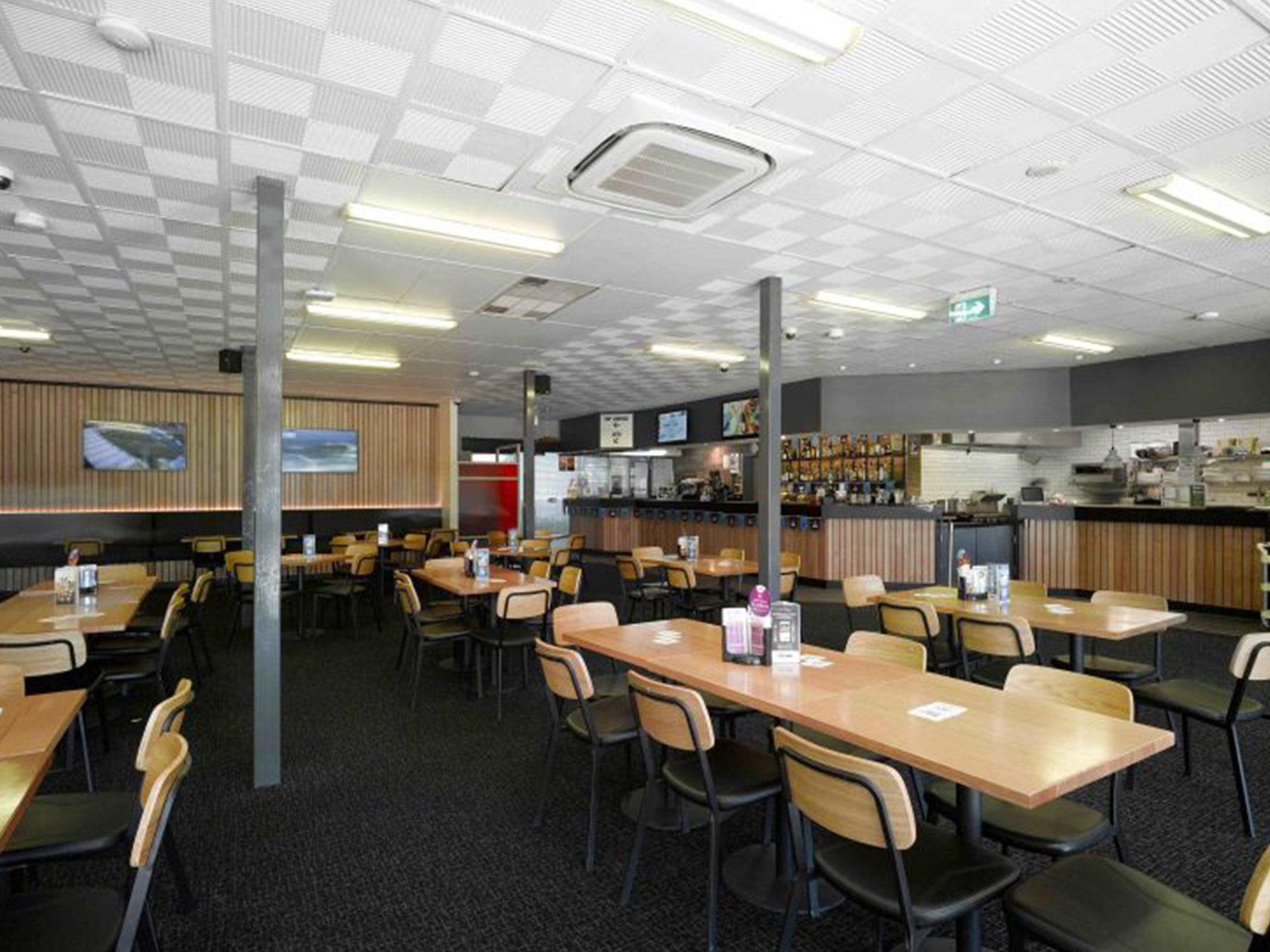 The site had to undergo a long rezoning process. A planning proposal was obtained end of 2015 to allow hotel/motel accommodation and packaged liquor outlet with max 1350m2 additional use. Once the LEP amendments passed, DA documentation for the site could commence.

Upon approval of the DA, we had to modify the mostly standard DA conditions and challenged the council as well as the RMS.

The staging of an operational hotel had to be considered carefully when planning the refurbishment. The old and new buildings had to be fire separated, new carpark works disruption and demolition noise levels challenged the ongoing operation of the hotel.

The hotel refurbishment works had to be done in a tight time frame allowing for limited stock items for the finishes and furniture which we addressed early.

Having specified Kaynemaile as the façade cladding being the backdrop for the Dan Murphy’s branding, Kaynemaile customised their material to suit the Dan Murphy’s signage colour and came up with a fixing detail for the individual letters through their screen.

We started the project from its birth by obtaining a survey, (rezoning) planning proposal and DA. This was then followed by producing Tender documentation, running the Tender process, providing Construction Certificate and Construction Documentation and administrating the ABIC Major Works contract during Construction Services. The advantage of being engaged for full architectural services gave us the transparency, ownership and consistency of design and delivery on this project.

Holding regular design and site meetings with consultants, stakeholders and builder were integral to the success of the project.

The result is that it is not your standard Dan Murphy’s when you look at it and that is exactly what we tried to achieve by responding to the environment it sits in.

The hotel facade is looking a lot more modern than its original state. 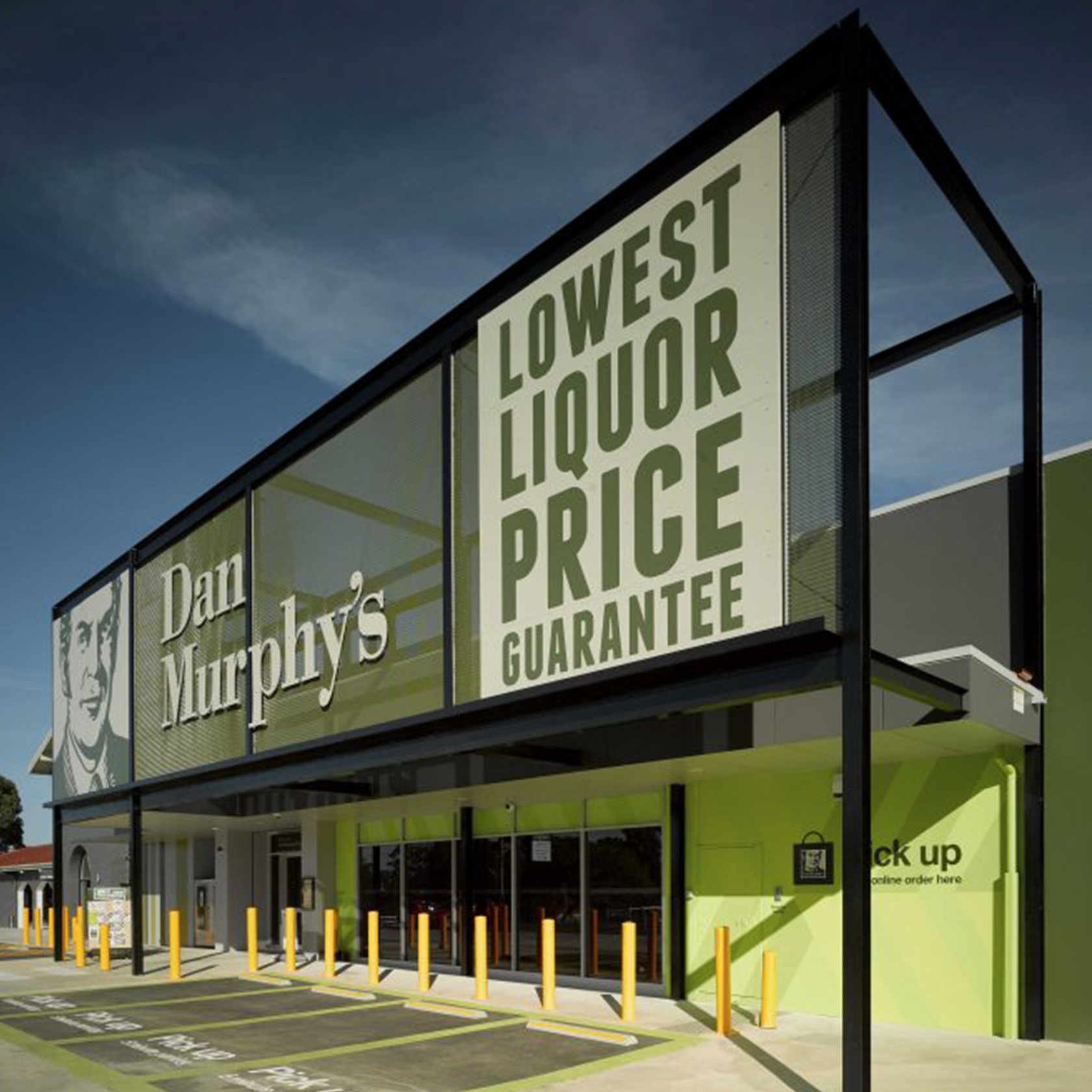 Using Kaynemaile to reduce the structural supports required for the screen, it also forms a strong entry statement with the customised colour to suit Dan Murphy’s branding. 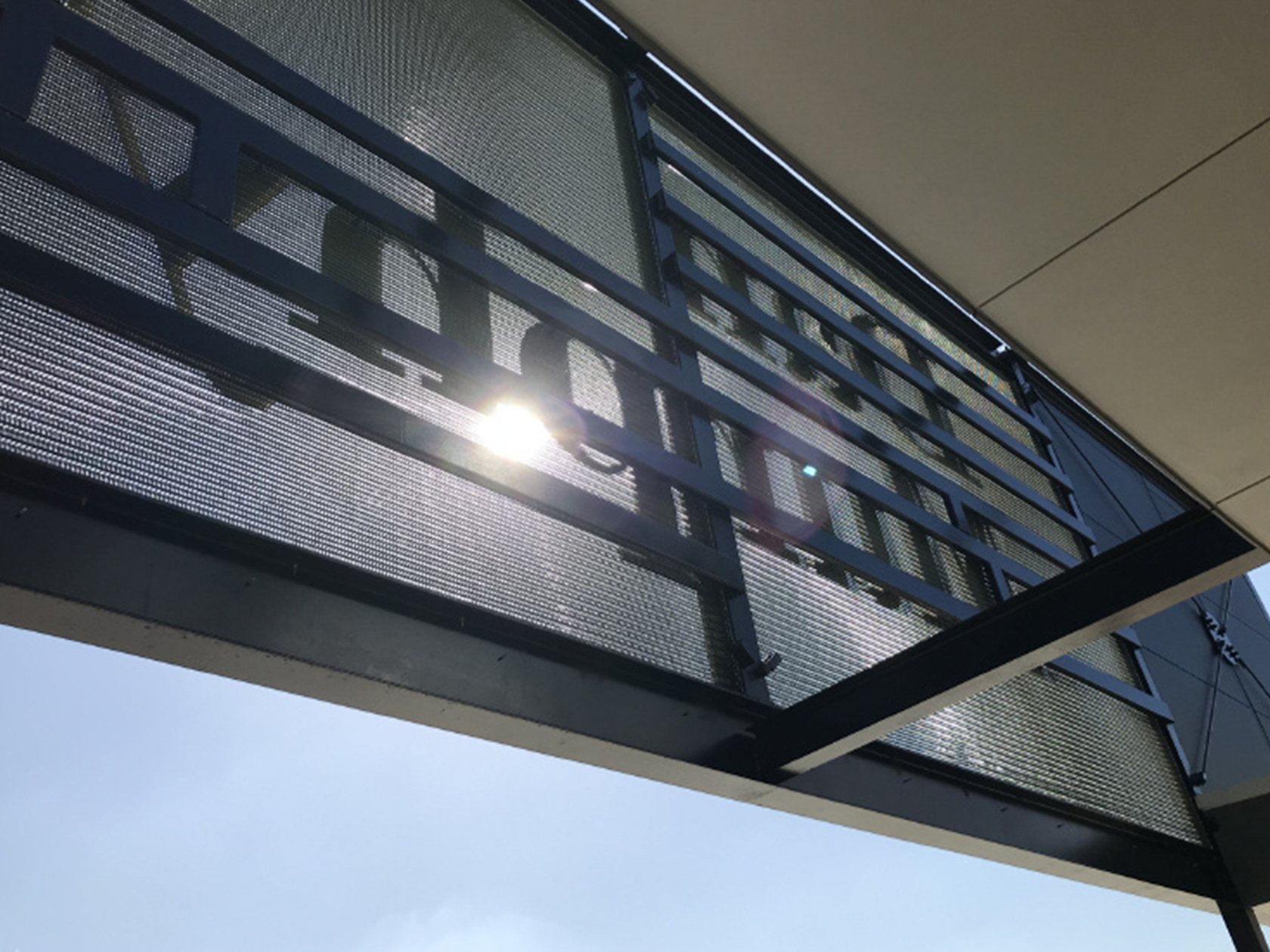 Overall the project landed on time and within the budget with a new look hotel and new Dan Murphy’s on site.

Locals are now more enticed to use the new bistro/kitchen, gaming and hotel premises.

Since opening late March 2018, the Dan Murphy’s has also implemented their first concept of a pick-up on this site.